Just returned from another great road trip filming shows for Extreme Angler TV season Eleven thru the south west U.S. beginning in Tennessee, thru Mississippi and onto South Carolina catching a variety to species including Crappie, shellcrackers, bream and largemouth bass.

Camera crew and I first landed on the 19th in Memphis TN and we`re met by the owner of Blue Bank Resort, Mike Hayes who picked us up and made some stops along the way thru the country side (for some fried chicken and hush puppies) on route to Hornbeak and world famous Reelfoot lake, home of the slab white crappie.
Got out for a few hours after we first arrived and got some nice fish to start the trip...(I really could not wait until tuesday to begin filming) 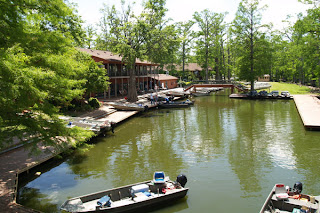 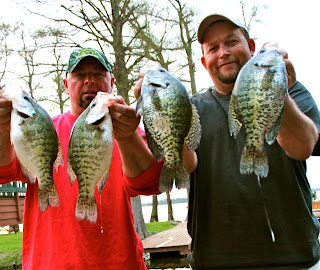 Filmed a show spider rigging amongst the stumps of Reelfoot and although we didn`t get any monster slabs, we sure did put a beating on the big white slabs the lake is famous for with Strike King crappie rage grubs at scattered depths ranging from 3-5 feet below the surface, tightlining with 1/8th ounce jig heads.
The weather turned a bit nasty on Wednesday with high gust winds pounding the lake.
But, the show is called Extreme Angler TV, so off we went with Strike King crappie pro staffer Jackie Vancleave in his customized 19 foot camo johnboat, bouncing off stumps and setting out lines until we found the larger crappie in shallower water close to shore, which made for some exciting moments and plenty of double headers.
I have had the opportunity to share the boat with some of the finest Bass anglers in the world, and can easily say, these Crappie pros are just as intense and serious about their trade, they leave no stone unturned in preparation and execution "dead serious", just the way I love to fish. 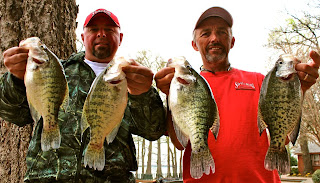 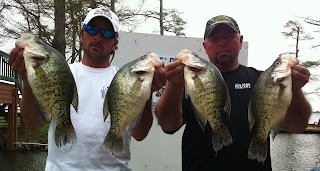 After wednesday`s fish with Jackie, we hooked up Tim Blackleys Harley Davidson wrapped Ranger boat to the matching big diesel pick up and headed to Mississippi to fish on one of the worlds finest slab crappie lakes, Lake Grenada on thursday and friday.

We were met with high, bright sunny conditions and calm water, perfect for shallow water slab hunting in the off color water and stump filled spawning flats.
Once again, these giant pearl white fish did not let us down.
The bite was quick with plenty of 10"-12" smaller males (which are considered small compared to the "average" crappie in this lake)
We fished slow and methodical and used Tim`s vast knowledge of crappie hunting and began hitting the larger female slabs this lake and state are famous for. 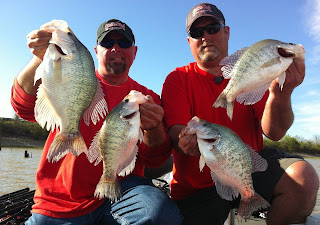 Words alone cannot describe how "wild and powerful" these big white slabs really are.
Granted, we we`re using medium light action rods in the 14 foot range with light jigs and 8-lbs test lines, but when you set hook into one of the giants of this lake, all "heck broke loose" as the fish would make fast, powerful runs every which way but loose!
And as mother nature designed these awesome fish with paper-thin mouths, if you did not hit the meat on your hookset, they would pull free or come un-buttoned after splashing on the surface before we could get a net under them.
We got two shows entitled "Land of the Giants" on camera and had a great time in the deep South of Mississippi. 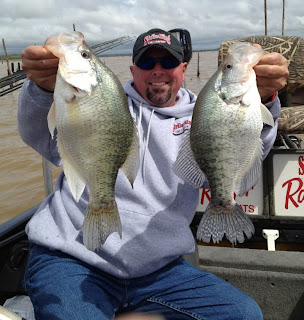 On the third stop of this road trip, we headed back to a familier location in Charleston South Carolina to hook up with our good buddy Patrick Crawford who operates Allure Fishing Charters and is sponsored by ReserveFishing.com for a variety of salt and fresh water adventures.

This time we launched his Ranger flats boat onto Santee Cooper lake in search of some Largemouth Bass in thick matted vegetation.
I have to admit, I am addicted to Bass and bass fishing, but when I can fish for bass in March, in shorts, sandals and light shirt, I don`t care how many bass I might actually catch, or how big they might be, the simple fact this northern boy can have the opportunity to be pitching soft Strike King perfect plastics into thick matted weeds in 80 degree, sunny weather, I`m happy!!

We didn`t locate or hook any true monster Bass, but boated 8 decent fish in the heavy stuff and saw some amazing wildlife including 10+ foot Alligators that swam a mere boat length away from our rig under the mat and out to open water when we got to close to them. Now, that was "extreme" and captured some incredible close up footage of these beasts on their turf. 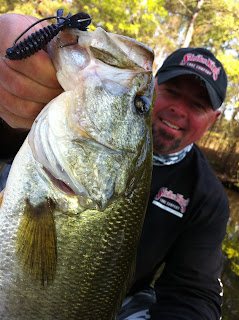 All in all, it was an amazing road trip that lasted 9 days thru amazing country and once again met some great people and caught some real nice fish along the way.
Can`t wait to return to the good ole` south!
Posted by Karl Kalonka at 17:39 3 comments: